Profound power,
to act and react,
on what matters most.
Stub ridicule,
Spite sarcasm,
Erase negativity,
Glow in the glory,
Of undemanding goodwill.
To smile with eyes.
To leave behind a soul.
To be craved when here.
And to remain when gone.
Posted by Nonsensefile!! at 11:03 AM 26 comments:

Beach and memories at Fort Kochi

Ask me where the best place is to be,
Right here on the shores of Fort Kochi.
Lazing by the languid beach,
Gazing at the curling waves,
Joyous days past,
Gush forth overwhelming the heart.

A childhood spent rolling in the sand,
Screaming at the waves,
"Mother Ocean if you dare, come drench me"
Believing blindly thrusting challenges
Forced the ocean to throw
Its mightiest waves to wet tiny restless feet.

When i was younger,

There were no
fancy antique stalls, bearded snake charmers and circus wallas
Haunting the beach.
Neither Kathakali evenings,
nor magic Ayurveda massages in vogue.
And yet it felt like home,
Naively native.
Today the scene has changed,
The rhythm fine tuned,
More foreigners throng this place,

Home stays and pushy guides
Orchestrate the tourist rush.
Minting money, winning hearts,
Selling the soul of this land.
Today i return,
Years and realizations later,
Witnessing a shore no longer endlessly winding.
Only a paltry cobbled pathway,
Much polished and posh,
And yet the shore
eaten up by the sea
Is starkly amiss.
The stretching sand,
Enough to play football n freebie
Is lost alas.

I am told the sea is gobbling up the land
Like a thirsty monster on rampage.
A row of moldy rocks block,
further intrusion
Of the thunderous threatening waters;
The beach broad and sprawling,
The sands i used to know,
Is only a treasure cherished in memories
Of nostalgic fools like you and I.

When i was younger across the ocean,
Stood the horizon.
Today stands an island:
The cherished project of the government
Promising wealth and well being for the land.
They say
The sand from this side of the shore,
Was swept across partly by ocean n mostly by man,
to form this mound of future prosperity.

Bathed in shimmering lights the container terminal,
Echoes the image of a cruise ship at dusk.
Its true it reflects prosperity.
But sitting by the bench on the adjacent shore,
Gazing at this massive construction,
Cant help but wonder,
Meddling with the ways of nature,
Were we shouting,
"Mighty Ocean, if you dare throw us a Tsunami"?
Coz when i was younger i trusted the waters,
Like everything else in life.
But today sitting by the sea
Distrust always lurks by.

The Religion of Politricks

I rushed into the auto,

running late to work,
gasping for breath,
I asked him to lower
the blaring radio
spitting election news.
As the volume lowered
and better sense restored,
he started a conversation
that turned more a monologue,
as i remained reaction-less,
impatient and cross,
at this uninvited jabber.
"Madam this time the tides are changing!"
He exclaimed excited.
"Anarchy and decay
have swept the land.
But this time the wheels
of fortune will change.
This time righteousness will prevail.
I have fasted and prayed,
Offered poojas at dawn
and showered garlands countless.
This time I have
pierced my tongue,
and pleased the family deity.
For sure this time,
Amma will take power,
snubbing the forces oppossing.
Madam i will tell you how
Amma is the one,
Destined by stars divine;
Amma is the goddess herself Madam!
Yes, a reincarnation of Durga.
The Goddess fierce and furious,
The warrior who rages,
battles injustice,
and tramples vicious demons,
whose presence pollute.
Yes she was born,
to redeem the land!
Amma is my living deity Madam.
Dont be scared,
But i was put in jail,
Yes, of course it was fixed,
False charges, you see.
My family and I,
Rotted in misery,
For countless days,
Unsure and tortured,
Until one day,
A miracle happened,
The party rescued me
Giving me
a second lease of life.


Ever since i have been faithful
I have recruited and enrolled,
Big names for the party,
But i have never contested,
For it invites envy and quarrel aplenty.
I have no regrets anyhow,
For people come to me begging seats now.
If the party wins,
I will make my auto AC.
And take you around for free.
If the party wins,
I assure you,
a government job
With a snap of my thumbs.
If the party wins,
we will be kings.
If the party wins,
We will erase,
Not just the opposition,
But their questionable position,
On the existence of God.
If the party wins,
we will replace,
all the Christians
Of this land.
For Christians,
worship a God that is not Hindu.
But don't you worry Madam,
The party is kind to your Islam,
For did you know,
Our devi was wedded
To a muslim.
If the party wins,
Together we will monopolize the offices of power.
And kick the Christians on their asses!
Madam I never let a Christain,
step into my auto.
If they do,
I ask them to leave,
Never bothering about my fare.
Madam don't worry, your job i assure,
For the days to come will bring us cheer.
I can adjust with your people
But never with the cursed Christians".
We reached the destination.
I stepped out.
Asked if he needed his fare.
For i was a Christian
Who he had took for
a Muslim.
Posted by Nonsensefile!! at 10:54 PM 14 comments:

Turning a page,
I dipped into the world
Of incessant beauty.


Away from the cares
Of mundane chores,
The words took me,
To a land unknown,
Climes unseen,
And men of dreams.


Rousing the blunted
Embers of emotion,
Longings for passion,
Unbound recreation,
The senses danced up
To a trance.
Groped in the grip
Of this sensuous treat,
My senses revoked,
As I smelled,
Pungent carrots,
Burning right in front!
P.S. This Poem won the following award at http://promisingpoetscafe.wordpress.com/2011/04/25/the-thursday-poets-rally-week-42-perfect-poet-award/ 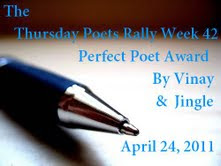 I am ecstatic! Thanks Jingle for the award! Here is the second poem as required...

Cease mentally dissecting!
Give chance to the voice within.
You may shed a tear,
You may end up hurt,
You may break a heart,
But never will you regret;
For once you did what you wanted
And never have to ponder "what if i did".

On a balmy night,
I settled beside ammama
Inside the ancestral taravaad,
Surrounded by abundant grounds and fields beyond.
Dressed in spotless white,
Her tresses flowing over her spine,
She sat on the veranda,
Crushing the beetle nuts, preparing the evening round of paan.
Pulling her pleated tail hanging beneath her chatta,
I pestered her to tell me a tale,
Like the one she told the day before,
Of the river monster or of the evil magician who swore.
Straining her forehead,
She looked ahead,
Recollecting a fearful tale,
That would leave me tailing behind her for the rest of the night.
"Tonight I will tell you a tale of old.
A story that never bores,
If you see in your head,
The events unfolding through my words".
In her matronly tone she began the story
Of her grandfather,
And of his lush fields,
Streaching beyond the farthest corner the naked eye could reach.
Veliyappapan as she fondly recalled,
Owned both land and men,
Was a man who found prosperity and contentment,
In his labours on the land.
Once when the yeild was ripe and ready for harvest,
The caretaker reported unrest,
In his precious plantain grove,
Yielding succulent fruit.
Anger fuming on his face,
He walked into the fields,
To see for himself the destruction bought on by wild beasts.
In disbelief he stared at the dear plantains uprooted, rotting in a heap.
Instantly he deployed men,
To take rounds around the field,
To guard and protect the borders of his farm,
From a repetitive harm.
And yet again next morning, he heard the same!
The farm attacked once again!
"How so?! How so?!" screamed the old man in despair.
"When the night guards retreated after the rounds at dawn" came the reluctant reply.
Velliyappapan took his spear,
And marched to the fields himself,
With a swear under his tongue,
To roast in fire, the beasts that ruined his prized plantains.
He took his post atop the tree house,
Watched with pride the land ahead,
Saw the sun set and darkness envelop the terrain.
The village fell asleep, but not he and his men, awaiting their prey.
The generous moon gifted the light they needed,
To spot any movement in the lands below.
But nothing stirred that night,
And just when they were about to call it a night,
The winds carried to them,
The distant grumble,
A sudden rubble,
From the far north end of the farm.
Velliyappapan woke his drowsy men,
And ran where his ears took him,
He saw in the moonlight,
Two mighty bullocks rampaging his precious plantains!
Seething with anger,
Screaming revenge,
Pointing his spear, the bulls he chased,
Like a mad man possessed.
He ran and ran with all his might
Behind the bulls.
Behind the bulls he ran,
Like a hunter determined.
And just when Veliyappapan thought he could run no more,
He saw the bulls ahead of him,
Coming to a halt!
Lo! Ahead lay the mighty stream they could never cross!
He closed in on his prey,
Saw diabolic pairs of red eyes,
Staring as he raised his spear,
To plunge into their flesh.
But as he descended the sharp shiny ends of his weapon,
The beasts vanished from under his sight, Ayyo!
As if by magic or a devil's spell,
Leaving in its stead two cold rocks instead!
Perplexed I stared at my Grandma as she ended her tale,
Her face gleaming in excitement,
As if she saw the mysterious disappearance,
Of two full grown, wild beasts herself!
Seeing me at a loss,
She explained wide eyed,
"The bulls were evil spirits dear,
Possessing power to transform form as they desire!"
Scared I shivered at the prospect of such evil.
"Do the bulls across our fields hold such power?"
Panic stricken i cried.
Laughing, she reassured with confidence,
"Don't you worry child,
The advent of electric power,
Has roasted to hell all the evil spirits,
That dwelled in the dark and ruled the nights of old!"
Posted by Nonsensefile!! at 4:09 PM 7 comments:

Bursting along the seams,
Culled dreams haunting spaces each,
Unquenched desires gripping every inch,
That and more strife,
Stir the soul to beat retreat,
Retrieve the treasures of indifferent un-want.

The curling eights and sticky fours pick on the ego,
As fumbling attempts to command'em falter, turning you a zero.
Under their unrelenting gaze,
Stuck in a confounding maze,
Your only solace
Is to rush back from the chocking world of numbers
And find comfort conceding your fears in words.

Posted by Nonsensefile!! at 7:04 PM No comments:

Nonsensefile!!
A Literature student, a passionate dreamer and a compulsive non-conformist